The Kingdom of God

What kingdom? It means the rule of God.

The Church is the Kingdom of God on Earth.

It means the law of God. It means the government of God. It means the people who have listened to and who are willing to listen to and observe the commands of Jehovah. And it means that there is a God who is willing to guide and direct and sustain his people. Thy kingdom come, that thy government may be established, and the principles of eternal truth as they exist in the heavens may be imparted to men; and that, when they are imparted to men, those men may be in subjection to those laws and to that government, and live in the fear of God, keeping his commandments and being under his direction.

Thy kingdom come, that the confusion, the evil, and wickedness, the murder and bloodshed that now exist among mankind may be done away, and the principles of truth and right, the principles of kindness, charity, and love as they dwell in the bosom of the Gods, may dwell with us. I have demonstrated … that the kingdom of God would be literally established on the earth. It will not be an aerial phantom, according to some visionaries, but a substantial reality. It will be established, as before said, on a literal earth, and will be composed of literal men, women, and children; of living saints who keep the commandments of God, and of resurrected bodies who shall actually come out of their graves, and live on the earth.

The Lord will be king over all the earth, and all mankind literally under his sovereignty, and every nation under the heavens will have to acknowledge his authority, and bow to his scepter. Those who serve him in righteousness will have communications with God, and with Jesus; will have the ministering of angels, and will know the past, the present, and the future; and other people, who may not yield full obedience to his laws, nor be fully instructed in his covenants, will, nevertheless, have to yield full obedience to his government.

For it will be the reign of God upon the earth, and he will enforce his laws, and command that obedience from the nations of the world which is legitimately his right. 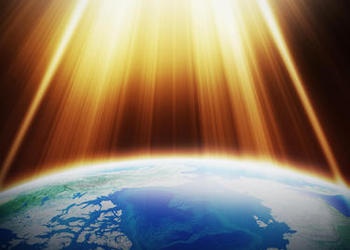 Satan will not then be permitted to control its inhabitants, for the Lord God will be king over all the earth, and the kingdom and greatness of the kingdom under the whole heaven will be given to the saints. It is the restoration of the earth and man to their primeval glory and pristine excellence; in fact, the restitution of all things spoken of by all the prophets since the world began [see Acts ].

A gentleman in France commenced talking to me, and wished to know if we thought of accomplishing something great in the world?

What does the Bible say about the Kingdom of God?

I told him we had come to preach the gospel to all the world; and that it had already reached the ends of the earth. It is not a work that will be done in a little corner, but it will reach throughout time into eternity. It will go back into eternity, and take hold of those who have died thousands of years ago, and bring them into the kingdom of God.

The powers of heaven lend us their aid, and our fathers in the eternal world are uniting with us; for we have the promise of the life which now is, and also that which is to come. We have only just commenced in our glorious enterprise. By and bye we will accomplish all that the fathers have spoken.

We have been talking about these things, but there is much to be done in the intermediate space between the present and that impenetrable period in the great future. It is not all a matter of faith, but there is some action required; it is a thing that we have got to engage in ourselves, individually and collectively as a people, and it is a matter of no small concern.

And the stone that struck the image became a great mountain and filled the whole earth. Now we will tell the interpretation of it before the king.

“The Kingdom of God Is Within You” - Life, Hope & Truth

For the God of heaven has given you a kingdom, power, strength, and glory; 38 and wherever the children of men dwell, or the beasts of the field and the birds of the heaven, He has given them into your hand, and has made you ruler over them all—you are this head of gold. The Kingdom of God will be established on earth when Jesus returns.

We prepare for the Kingdom by living according to the rules of the Kingdom now. So is everyone who is born of the Spirit. Shall we continue in sin that grace may abound? How shall we who died to sin live any longer in it? For the trumpet will sound, and the dead will be raised incorruptible, and we shall be changed.

The Kingdom of God

And the dead in Christ will rise first. And thus we shall always be with the Lord. About the Author. David Treybig David Treybig is a husband, father and grandfather. Entrance into the kingdom of God is roughly equivalent to though not entirely synonymous with John's "eternal life" cf.

Kingdom has connotations of authority and rule not associated with "life". Throughout the Sermon on the Mount Jesus stress how his followers are to live see previous class handout by Dr.


Constant on "Kingdom Ethics". The underlying truth is that God's rule is now mediated through Christ who has all authority Mt Kingdom of God is the "great theme" of the Sermon on the Mount. Inclusio of kingdom-possession beatitudes Mt 5. Kingdom is destined to be an eternal reality; it will continue to grow and finally prove victorious, though it faces much opposition now. Green and Marianne Meye Thompson.